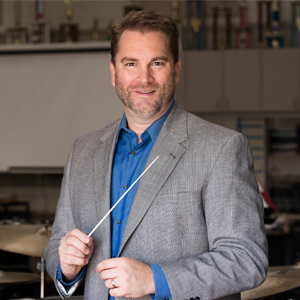 “One thing I say often to my musicians is ‘I don’t care what kind of musician you are in twenty years, I care about what kind of person you are.’ Music is the vehicle that can support and foster the values of discipline, hard work, empathy and respect for their future.” – Mitch Bahr, 2016 California Teacher of the Year Application

Mr. Mitchell Bahr is the director of instrumental music at Foothill High School, in Palo Cedro. Previously, Mr. Bahr taught at Rancho-Starbuck Intermediate School in Whittier. As a music educator for 23 years, he holds a Bachelor’s Degree in Music Education from Biola University in La Mirada, and a Master’s Degree in Music Education from Southern Oregon University in Ashland.

Active in the community, Mr. Bahr networks with music educators and musicians at all levels. He is an active teacher, arranger, composer, festival host, guest conductor, clinician and lecturer. In addition, his work and insight on music education have been featured in California Teachers Association, Shasta Parent, BIOLA Bravo, Bandworld, Enjoy, and The Instrumentalist magazine publications.

Consistently as an outstanding educator, Mitch was awarded the Most Outstanding Musician (1996) from the Biola Conservatory of Music. At Rancho-Starbuck, he was granted the City of Whittier Honorary Service Award (2002). At Foothill, Mr. Bahr received the Public Broadcasting Network’s PBS Outstanding Educator Award (2014), California State Teacher of the Year (2016), and CMEA Northern Section Music Educator of the Year (2020).

Former Foothill Principal Jim Bartow remarks, “Mitch is, without a doubt, the most amazing teacher I have had the pleasure to work with in my 35 years of education. His ability to instruct about various musical styles while maintaining discipline and respect is a beautiful thing to observe.”