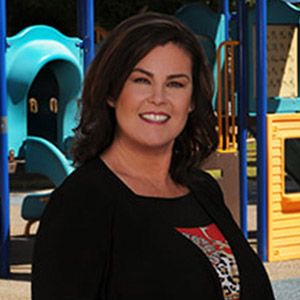 “‘Be Awesome Today!’ is a sign that hangs over my desk. It ensures that today is the day that something new will be learned, a song will be sung, a laugh will be shared, a friend will be made and a moment may occur that will be remembered long after this day has passed.” — Michelle Cherland from her 2016 California Teachers of the Year Application

Mrs. Cherland has been teaching for 14 years, 10 in her current position at Carrillo Ranch Elementary. A veteran of 12 different schools in 13 years when she was growing up, she never felt these many relocations (a result of her educator parents’ career moves) were a disadvantage.

“I found it to be an adventure. Every school I attended had an entirely different culture. For instance, in fifth grade, the children were direct descendants of the rich and famous. Two years later, I went to a school composed of migrant workers’ children who didn’t speak much English,” she said.

She is also an Army veteran having enlisted in 1991 when Operation Desert Shield had become Operation Desert Storm. She went from being an enlisted soldier to an army Captain during a wartime deployment – considered an extraordinary feat. Mrs. Cherland recently retired from the Army Reserves with 24 years of honorable duty.

Highly decorated and serving three tours of active military duty, she always managed to keep education in her heart even during war. On a road march in Iraq, she brought to the convoy two heavy duffle bags and carried them the many miles to camp. As she unpacked, her fellow soldiers were amazed to see that those heavy bags were full of books for the Iraqi children.

“She is respected among her peers, beloved by parents and students. She inspires and leads others to higher levels of performance and a deeper commitment to a student-centered philosophy,” he wrote.