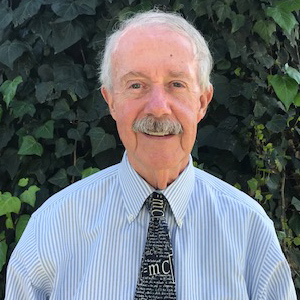 Dr. Hawkins began his teaching career quite by accident. He was working at Disneyland when a friend there suggested that he apply to be a substitute in the Fullerton Joint Union High School District (FJUHSD). He applied, was accepted, and soon had a long-term position teaching Spanish and German at Sunny Hills High School.

Following this, he became a general substitute among the seven high schools in the FJUHSD, while he continued working nights and weekends at Disneyland in the Payroll and Cash Control Departments, with one day per week at the Disney Studios in Burbank. This was a great learning opportunity, but quite exhausting; so, when an opening occurred in the Earth Sciences at Sonora High School, he jumped at the opportunity. He also became an assistant coach of the water polo and swim teams which led after about seven years to being named head coach.

Eventually, there was a need for a Chemistry teacher at Sonora, for which he applied and was accepted. That position, along with coaching, continued until 2018, when he retired. In 1990, under his leadership, but with a committed team of excellent teachers, the staff of the sciences designed and implemented a somewhat drastic but highly effective method of student learning in the sciences, at that time referred to as integrated science.

Each student would study each of the four major sciences each year, an integrated science program. This would ensure that each and every student would complete Earth Science, Biology, Chemistry and Physics with concomitant experiences in the laboratory by the time they graduated. This continued until about 2001, when modifications were made that included much of the integration, but returned to a somewhat more traditional structure.

Also, in order to meet the interests of students in the sciences, a science elective program was designed and began implementation in the 1980s. Four science electives were offered for one semester each: Marine Science, Organic/Biochemistry, Introduction to Anatomy and Physiology, and Meteorology. Students could study one or all, depending upon their self-designed elective program, that also generally included semester electives in other departments of the school.

Dr. Hawkins entered the University of Southern California for his freshman year of college on a full scholarship to study architectural engineering. He transferred to UCLA for his sophomore year, where his studies included Biology and Chemistry. He then spent one year living with his uncle and family of seven children in Ohio, where he attended the Wright State campus of The Ohio State/Miami Universities. He finished his undergraduate education with a final two years back at UCLA. He earned his Master’s at Cal State Fullerton in 2002 and his Doctorate in Education at USC in 2005.