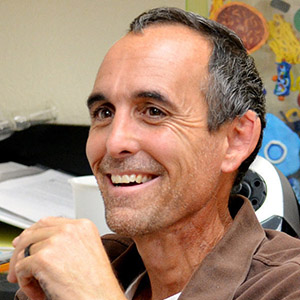 “I believe science should be central to K-12 learning. Fortunately, the Common Core and Next Generation Science Standards aim to accomplish this! We are born as natural experimenters, and educators have the opportunity to capitalize on that and to reinforce the natural curiosity that is innate in all of us.” — Christopher O’Connor from his 2015 California Teachers of the Year Application

O’Connor has been a teacher for 19 years and for 10 of those years has been at St. Helena High School teaching Biology, AP Biology, and Science & Media. Before he became a teacher, he worked in various research science positions, including in biotech and as a fisheries biologist in Alaska. These experiences, he wrote, inevitably guided him to a career in teaching because of its dynamic nature: its continual change, continual growth, and space to innovate and adapt.

He points out that teaching is not for the timid, especially in terms of mental exhaustion. “(But) as an influential teacher, you have the unique opportunity of helping to shape the life of another, often in powerful and transformative ways.”

O’Connor has had many innovative science projects, not least of which was to convert local waste vegetable oil into a diesel fuel alternative. The self-sustaining operation has been a success as community cars boast bumper stickers that read: “Powered by St. Helena High School Biodiesel.”

Napa County Superintendent of Schools Barbara Nemko wrote of O’Connor: “During the 10 years that Mr. O’Connor has been teaching at St. Helena High, he transformed his early career as a research scientist into the coolest, most exciting science program that could exist on a high school campus.”